PlayStation VR marks Sony’s entrance into the world of VR. Why should we care? Well, initial reviews of the device showed that the company’s efforts to bring the world of VR to consoles were rather impressive.

Even thoughthe sales of PlayStation project Morpheus VR began more than a year ago, it’s still going strong, mainly because of a comparably low price, quality experience, and an abundance of games.

So, we thought we’d see that Sony’s VR hardware has to offer.

“Futuristic” is perhaps the best word to describe the headset. Black-and-white plastic and curved cursor and seven front-facing blue tracking lights make the device look like something out of Star Wars rather than something you can easily buy from a local game store.

Given the Star Wars-like look, you may expect the headset to be a bit uncomfortable. However, Sony exceeded all expectations with the radical new design: an adjustable headband with floating screen in front of the eyes. So, forget about the head-strap and goggles.

To make the experience even more comfortable, the designers made it possible to move the screen forwards and backwards with a press of a button. So you don’t need to take the headset off in case you want to adjust the focus.

Like any other headsets, PlayStation VR produces two images simultaneously and sends them to a headset to immerse the user into the VR experience. However, one thing is different: while most other devices require costly graphics cards, this one only needs the PlayStation 4’s built-in GPU.

While this sounds great for those who don’t want to burn a hole in their pocket by buying super expensive graphics cards, we should note that users of this headset should be aware it uses only one camera to track the points of light on the device. 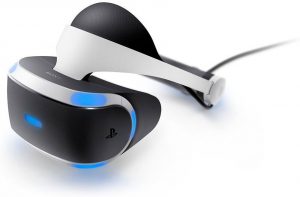 This means that PlayStation cannot offer true room-scale VR because every time you make several steps in any direction, the system will warn you that you’re straying too far away. Therefore, the device can offer the best experience in games that don’t require you to wander around.
Here’s the full list of PlayStation VR specifications:
• 5.7 inch OLED screen
• Resolution per Eye: 960 x 1080
• Sensors 360-degree tracking, 9 LEDs
• Connection: HDMI, USB
• Field of View: approximately 100 degrees
• Tracking System: PlayStation camera
• Weight: 610 grams
• Room Scale Support: No
• Integrated Headphones: No
• Current Average Price: $350

Now, let’s see the strengths and weaknesses of the device.

Even though the field of view is smaller than other headsets, it’s acceptable for this price range. The visuals don’t match the visuals of competitors but are still impressive. In other words, PlayStation VR is still a decent headset that comes in cheaper than the competition, which may be a deciding factor for users.