Without a doubt, high prices of VR headsets are the biggest obstacle to their wide adoption. This obstacle prevents an entire multimillion industry from forming, which is a shame because everyone who tried VR is blown away by it, obviously.

Lenovo Explorer aims to address this issue head-on. This headset, based on Microsoft’s Windows Mixed Reality platform costs around $300, which makes it much more affordable than other options such as HTC Vive.

Besides, Lenovo Explorer aims to resolve a problem with a complicated setup. The best word to describe the setup of VR gear in most cases is “mess,” so it’s possible that Lenovo lowered system requirements and eliminated many setup steps to address this.

So, it’s time we take a good hard look at Lenovo Explorer and see what kind of impressions it can leave us.

Lenovo Explorer has a black design (which instantly reminds of the HP Windows headset) with a flip-up visor. The headset has a really sleek and cool look, and the design of the visor ensures a comfortable fit due to the reduced pressure on the head.

The measurements of Lenovo Explorer are similar to other Windows VR headsets: 7.3 inches x 3.7 inches x 4 inches. The weight is just 0.84 lb (380 g), which makes it lighter than well-known models such as Vive. Most of the weight is focused on the forehead.

The heart of the headset includes two 2.89 inch LCD displays at 1440 x 1440 resolution and two motion-sensing cameras that deliver a sharp experience. To connect to a Windows Mixed Reality capable computer, the device uses a 12 foot long Y cable with USB 3.0 and HDMI connections. 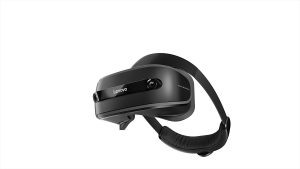 Along with the headset, you’ll get Windows-branded controllers powered by AA batteries. They’re plasticky, and include both a directional touchpad, a windows key, a bumper button, a select button, and a thumbstick. Learning to use the controllers requires some time, but it’s just the way it is.
Most of the users of Lenovo Explorer have rated them highly in terms of comfort of usage.

• More affordable than other models including HTC Vive and Oculus Rift
• Light weight that results in less pressure on the head
• Comfortable fit (the device doesn’t depend on straps to connect to the head)
• Modern, cool look
• Decent number of VR titles in the Windows store
• Can be used with most modern Windows 10 PCs

The manufacturer did a really nice job with Explorer because it offers a decent VR experience for such a price. Besides, it’s light, comfortable, and can be used with most PC, which makes it a perfect solution for those looking to make the first purchase of a VR headset.
At this point, Lenovo Explorer looks like a solid headset that may be the one that finally makes the VR more accessible to wider audiences.

HTC Vive Virtual Reality Review: Price, but totally worth it?